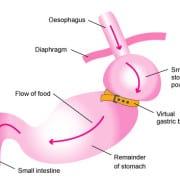 With so much publicity now abounding around gastric band surgery on the NHS for the morbidly obese, it might be a good time for some of those at risk of type 2 diabetes to consider less risky alternatives,after all baratric surgery carries with it huge risks and “should only be considered as a last resort if serious attempts to lose weight have been unsuccessful” Simon O’Neill Director of Health Intelligence at leading charity Diabetes UK.

This is where hypnotherapy for weight loss and hypno gastric band treatment could be a safer, cheaper and potentially more effective option for many people. These two treatments can be used separately or jointly as part of a planned treatment programmed tailored to each indivduals needs, combine the both with CBT and you have a most dynamic weight loss system which can be highly successful. As with everything in life there are no guarantees but one would have thought it would be worth a serious try before signing up for drastic sugery.

Many of those who are over weight have tried numerous times to lose that weight and on occassion they do succeed by dieting but most people who diet end up putting not only the amount of weight they have lost back on but sadly they often end up weighing even more. Diets alone do not work for many people long term and will power is often not enough. There are a myriad of reasons why some people over eat and many of them are emotional and not amenable to rational thought, emotional eating can be notoriously difficult to change.

Your mind is a most powerful organ and by utilising it and all its potential from both the conscious mind and the subconscious mind to obtain your desired weight can be extremely effective. For this method to work you must be willing for it to and as with everything you need to really want the changes. Using either hypnotherapy for weight loss  alone or combine that with the CBT and the hypno gastric band you can retrain your mind and begin losing weight from day one. This is no miracle cure and you may find that once you have acieved your desired weight that from time to time you need a top up session, then again you may not, this is still far preferable to years of yo yo dieting and has to be a far better option than gastric surgery.

Want to join the discussion?
Feel free to contribute!